The island of Santorini is located in the southern waters of the Aegean Sea and is a part of the Cyclades group. Despite its small size, the island has a rich and ancient history. The first settlement on the island appeared in 3000 BC. A thousand and a half years later, the island experienced the largest eruption of the volcano Santorin, which caused a tsunami, which not only forever changed the appearance of the island, but also led to the death of the oldest Minoan civilization.

All the colours of your unusual wedding on Santoryni 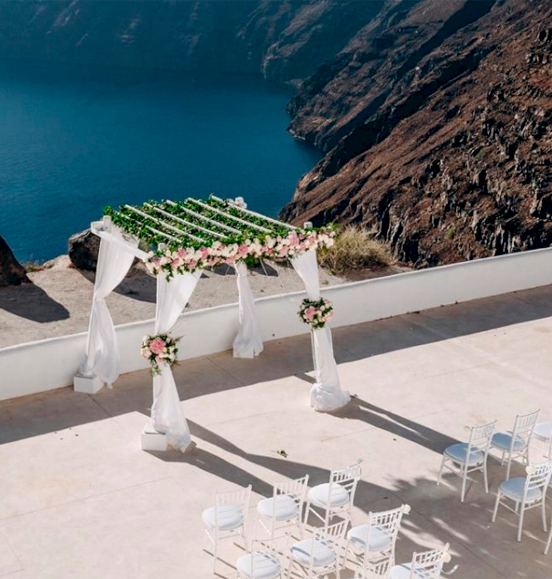 After the eruption from the once large round island remained only a small crescent of sheer cliffs in the western part of the island and gentle beaches in the east. In the west of the island a unique volcanic landscape preserved, created by frozen lava. Sheer cliffs rise from the sea to a height of 100-400 meters, on the slopes of the caldera of the volcano are several settlements of the island — the capital of Thera, the villages of Oia, Imerovigli, Megalahori, Firostefani.

Every settlement on the island — it’s like a miniature box with a secret, because you never know what awaits for you around the corner. The long labyrinths of narrow streets can be walked for hours, enjoying the magnificent nature and unique architecture of towns and villages. White houses of settlements shade bright blue domes of churches, on winding streets, scattered a lot of souvenir shops, shops of artisans, restaurants and taverns.

On the east side of the island are amazing beaches with volcanic sand — white and red Beach Akrioti, black beach Kamari, white sands and quaint cliffs of the southernmost beach of the island of Vlihada.

And the vast blue of the sea and the sky around.

Where to go after the wedding ceremony

In addition to the magnificent natural landscapes on the island you can see beautiful monuments of architecture — churches that are more than 1000 years old, the monastery and temple of Ilya the Prophet, the church of Panagia Eskopi (11th century), the symbol of the island church Agiu Mina.

Near Akrotiri there are excavations of the ancient city, which was on this site even before the famous eruption of the volcano Santorin. Now there is an archaeological reserve.

On the island you can visit the Maritime Museum and the Wine Museum, ride a fox — a unique transport for travel on steep slopes and climbs of the rocky shore.

It will be equally comfortable, as fans of secluded rest, and fans of noisy parties and busy nightlife.

The beauty and special atmosphere of Santorini attract not only tourists, the island has become a real territory of love, where every year there is an incredible number of weddings. Thousands of couples in love from all over the world come to Santorini to take an oath of love and loyalty in the most romantic place on the planet. And if you have this happy event in life, there is no better place to find.

Our company organizes your wedding on Santorini and we are happy to plan this important and significant event. If you desire, we organize an interesting excursion program for newlyweds and guests.

Marriages are made in heaven, and on Santorini!

Do you want the same?

Do you want the same?